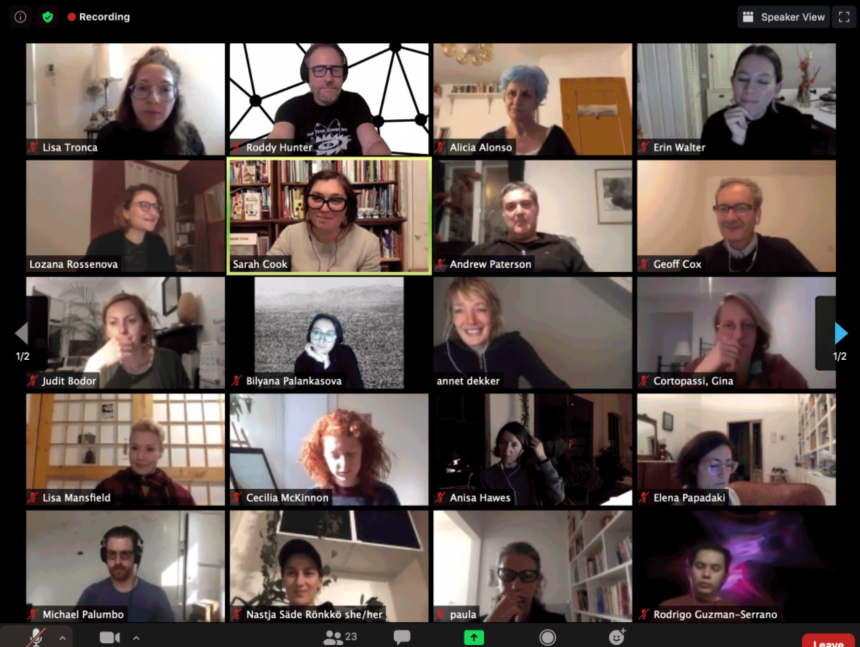 Organizers Sarah Cook and Roddy Hunter were joined by artists, curators, archivists and an international group of graduate students to jointly investigate the question of preserving networked art practices during the ISEA 2020 virtual conference. The organizers conceived of such practices in a broad sense, spanning beyond art on the internet, to include all artworks which draw upon networks of distribution and exchange (online or offline) as their primary medium of production. The workshop set out to unpack the current state of digital preservation methods and approaches. The aim was to open up a discussion around present (and even future) implications of networked infrastructures on art practices, both on a technical as well as social level. The guest presentations that followed offered ways of thinking about preservation and networks, that resists easy classification.

In the first part of the workshop, curator and researcher Annet Dekker presented a short talk on her research and conceptualization of networks of care that develop around works of net art. She used an anecdote involving artist Igor Štromajer to illustrate how net art works are rarely (if ever) fixed entities with an easy to pinpoint ‘original state’. In 2016, Štromajer started sharing files via email (initially regular image or audio files, and later encrypted files) to a select group of individuals within the artists’ network, including Dekker.

The artist described the work, -oμ4x, as “a kind of a cycle, a durational, perhaps never-ending online performance” (Štromajer, in: Lost and Living (in) Archives, 2017). Dekker observed that this purposefully unresolved aspect of the work is potentially more interesting than the individual files, and so it could be a good case for shifting preservation discourse away from the idea of returning the work to an ‘original state’. Instead, she asked us to question what does it actually mean to preserve a work, particularly if it is fragmented, durational, and also participatory, as this example by Štromajer.

Another work which brings this point into focus very clearly is Martine Neddam’s Mouchette. A well-known piece of net art, it has evolved over time to include numerous performances, projects and objects that extend the character of Mouchette beyond the original website set up by the artist. The initial Mouchette website and database included participatory features and there was a membership network which could already copy and edit parts of the site, and make their own ‘forks’ of the project. Additionally, a network of caring individuals and organizations emerged around the work when a legal dispute over the character’s name threatened the shutdown of the whole project. All of this contributed to the development of a loose, distributed network of stakeholders hosting and preserving various fragments of Mouchette since the late ‘90s.

But what does care mean in this context? How do networks care? Dekker pointed to the work of ethnographer Anne Marie Mol in healthcare contexts, and the more recent scholarship of María Puig de la Bellacasa around matters of care, as important perspectives on a more critical, more open-ended reading of care. Rather than thinking of care as something that is given or taken (i.e. an exchange), it can be conceived as an ongoing collaborative endeavour, with distinct social, technical and political challenges.

As a last example and opportunity to talk through some of these challenges, Dekker discussed the complex history of efforts around preserving and exhibiting Shu Lea Cheang’s Brandon. Brandon was the first work of net art to be formally acquired by a large collecting institution (the Guggenheim in New York); however, the question of what this acquisition actually entailed remained unresolved for years. The work was networked not only in its code structure and the way different parts interlinked, but also in its production method, with parts being developed by different collaborators and institutions over time. This made the task not only of collecting, but then also of maintaining and presenting the work in exhibitions, a continuous challenge for the museum. Distributed efforts across institutions, conservators and curators spanning nearly 20 years resulted in the eventual restoration of (most) of the work, and its presentation as part of Rhizome’s Net Art Anthology online exhibition in 2018. But a detailed study of how these efforts came about conducted by Dekker, together with art historian Karin de Wild, revealed frictions in the network and limitations in aspiring towards a multidisciplinarity, while being bound to project-specific funding and limited number of partners. Turnover of individual Curatorial or IT staff members could also play a significant (negative) role in the long-term sustainability of maintenance efforts.

Citing research from the Tate and Guggenheim, both institutions with forward-thinking conservation departments, Dekker asserted that the challenges of preserving net art are indeed more closely related to the maintenance of effective social networks of care around the works, than to specific technical barriers or previously-held assumptions around the immateriality, or ephemerality, of the medium.

In the second framing statement to the workshop, researcher and web archivist Anisa Hawes focused on one specific method for digital preservation, namely web archiving with Conifer, a free and open-source tool.1 While the focus of the presentation was practical, Hawes – like Dekker – argued that the challenges to preserving web artefacts are not solely technical, but rather social: connected to the broader context of institutional policies and collecting mandates on national and international level, as well as the individual subjectivities of curators and archivists performing preservation actions. Hawes explained how both the technical set up of Conifer, as well as its conceptual vision for user-driven collecting, help overcome some of the limitations of larger national web archiving initiatives. The latter  are not able to respond to the needs of archiving complex, dynamic artists’ projects on the web, which often span various distributed networked services (like social media, among others). Hawes highlighted how the curator/archivist using Conifer to collect and preserve a piece of net art on the web remains an active presence within the collecting process, since during capture they make explicit, subjective decisions as to what components to include and where to draw the boundary around the distributed, networked artwork. Hawes concluded with the suggestion that this mode of operation requires adaptation within museum and collecting institutions’ own practices and concepts around questions of preservation.

In the discussions that followed the presentations, Hawes elaborated further some of her views on the subjective role of the human curator/archivist operating Conifer (or another web archiving tool), as well as the subjectivity embedded in the software itself. For example, Conifer was built to facilitate certain kinds of processes and interactions around user-driven web collecting; these processes and interactions are not neutral.

Dekker also argued that a network of care is itself an inherent part of the work, with its own distinct agency; it is not merely a tool facilitating preservation. Since there is no single ‘original state’ to aspire to, there is no need to perceive the fragmentation of work components, or the multiplicity of agencies and subjectivities in the process of preservation, as problems to be overcome. There are always different instantiations of the work; even at the time it was created users would see it or experience it differently; curators or archivists collecting different aspects of the work would bring their own subjectivity to that action (as per Hawes discussion), and so the question of the network of care becomes one of working collaboratively to represent fragments, track changes (via version control systems) and document processes, in order to keep the maintenance process going.

A participant in the workshop suggested that in practice, however, institutions tend not to show versions, preservation actions or other interventions to audiences. While this is indeed a common scenario, I brought up the example of Rhizome’s recent efforts to make their own preservation and curatorial work more visible, by the extensive contextual information made available alongside the Net Art Anthology exhibition, as well as the preservation ‘matrix’ listing each work, which was published both in book format and as a publicly available online spreadsheet.

Following a focus group session, the workshop ended with a final discussion, wherein participants outlined a few key take-aways, including:

In conclusion, the ongoing development of networks of care (such as in the cases of Mouchette or Brandon); open tools for web archiving and preservation (such as Conifer); and Rhizome’s recent efforts to develop a deeply relational, networked archive of data around works from the ArtBase and the Net Art Anthology; represent significant efforts in shifting traditional preservation paradigms and highlighting the significance of socio-technical relations over fixed material concerns.

The workshop included two working group sessions focused on specific case studies and practical methods that can be applied towards preservation. You can read about the other case studies elsewhere at https://networkedart.blog/blog/category/events/.

Note on illustrations: Images 1, 2 and 3 are slides from Dekker’s presentation. Image 4 is a view of the homepage of the Conifer web service.

About the author: Lozana Rossenova is a PhD Researcher at the Centre for the Study of the Networked Image and Rhizome. Her work focuses on the redesign of the ArtBase archive of net art maintained by Rhizome.